The true story of coworking, according to the guy that started it. And the inaccuracies of Wikipedia on Coworking.

The true story of coworking, according to the guy that started it. And the inaccuracies of Wikipedia on Coworking.

People in the coworking community know and love the “myth of the founding fathers”, a bunch of coders in California who created the first coworking space around 2005.

If you go to coworking conference, you’re likely to hear names like Brad Neuberg, Tara Hunt and Chris Messina.

And, of course, a reference to the Wikipedia page on “coworking”.

A few days ago, though, the person who invented coworking, declared that he had found several inaccuracies on that page.

First of all, Brad writes, he is the one who invented coworking.

Then Tara Hunt e Chris Messina came along to help him, and they worked as a team to share knowledge about coworking, by creating a Coworking Wiki and Coworking Google Group. They also filmed the presentation video that you can find below (with over 10 thousand  views on YouTube).

Brad also said that Bernie De Koven has nothing to do with coworking, apart from owning the coworking.com domain for some time.

The first coworking space was The Spiral Muse (and not The Hat Factory): Brad used to open it twice a week, thanks to the financial support of his father. The space remained open for about a year.

So, now that our founding father Brad Neuburg set the record straight… we need someone to fix the Wikipedia Coworking page accordingly, don’t we! 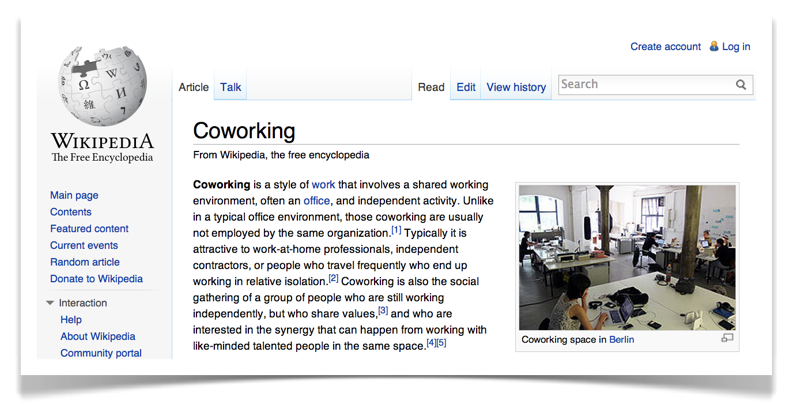 Mrs. Tajani might well be the first politician ever to conceive a structured plan for a public-funded ...
Read more

"Coworking" has become a truly ambiguous term. You may see it on a magazine cover one day, and ...
Read more